Kathy King, ProKids director of professional development/education and a ProKids CASA Manager and GAL, prepared these comments for the National Crime Victims’ Rights Week Commemoration Ceremony on April 10, 2018, as she received the committee’s annual award. 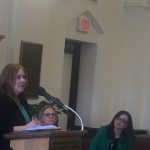 I’m humbled and honored to be with you this afternoon as we take a moment to reflect on the work we’ve done together – and the work we have left to do – on behalf of our community’s victims.

As a ProKids Steps to Peace Program Manager and now as the ProKids Director of Professional Development, I’ve been fortunate to collaborate with so many of you… outstanding people who really care about our community; victim survivors of crime, families of victims, and all the people who work tirelessly to make it better for all.

In 2001, when we began the Family Violence Prevention Project, with the YWCA as lead, we looked at where the gaps were.

A year later, that led to our project focused on Children Exposed to Domestic Violence and we were able to bring children out of the shadows and get them the help and support they needed.

And we have worked together since then to make sure not only that the needed help and support exists, but that it’s the right kind of help and support. Training trainers. Sharing in meetings. Getting the latest research into the hands of frontline workers. Training front line people across the system.

And those families are why so many of us come to work every day, or spend hours volunteering, or advocate so tirelessly.

One such family became a ProKids case nearly 20 years ago. There were six boys, ages 2 to 7. As we unraveled their story, we found sexual abuse. Physical abuse. Emotional abuse. Mental illness. Neglect. The physical and emotional scars were overwhelming.

We got them into school. Into therapy. Even made sure they went to the dentist.

And they were adopted: everyone’s dream for them.

But one by one, as each of them became a teenager, their trauma was exposed. They were angry young men. Hard to manage.

And just when they needed love and acceptance and guidance, their adoptive mother put them on the front porch with a trash bag filled with their belongings.

As we would expect, three of those boys now have criminal records. At least two of them were parents before they were 21. Only 4 of them earned (a) high school diploma(s).
But let me tell you about one of those boys. His name is Shaq.

When he was growing up, he told me he was “the good one.”

And he was. Compared to his brothers, he got into less trouble and kept going to school. He joined a church and became a youth leader. He developed a relationship with a family at church that allowed him to move in as he completed high school. He even tried to go to a traditional college.

But he could not completely outrun the demons of his childhood.

Many of you know about these demons, known as Adverse Childhood Experiences or ACEs.

Just quickly, allow me to explain what we’ve learned about ACEs.

First of all, they are common. Almost two-thirds of adults studied have at least one ACE. They range from physical and emotional abuse to household domestic violence to profound experiences like a parent dying or going to prison.

An ACE score is a total sum of these kinds of experiences, a quick clue to cumulative childhood stress.

Kids like Shaq, in the child protection system, nearly always have an ACE score higher than the general population.

And more and more research has shown that children who get a higher ACE score are more at risk for negative health outcomes – even into adulthood.

The more likely a person is to develop chronic illnesses like heart disease or diabetes.

The sooner young people will engage in risky behavior, including developing sexual diseases and getting in trouble with the law.

And the less likely someone is to avoid mental illnesses, including suicidal thoughts.

And sure enough, Shaq has been derailed time after time by debilitating depression. At age 22, he cycles in and out, struggling to find ways to have equilibrium in his life. He is still afraid of the dark.

Right now, he’s been keeping it together as a student at Central State University and working a part-time job. And he’s still really proud of being “the good one.”

But no matter what Shaq does in his life and how much he beats the odds, he will always struggle more than others who had a secure, safe childhood.

So how to make sure we have fewer victims? Fewer children who are marked by ACE scores that statistically mean they will have a less promising future?

That is where our opportunity continues to be.

As we learn more we will all learn to ask, adults and children alike, not “what’s wrong with you?” but “what’s gone on in your life?”

Was there abuse? A mentally ill adult around? Poverty? A relative in prison?

When we get past “what’s wrong with you?” we can work toward offering the support and services that lead to real healing.

We have learned so much. And we certainly have so much more to learn.
But I know, surrounded by all of you in this room, that we can make a powerful difference for our community.

Whether in the court system, through the prosecutor’s office or probation office, with the YWCA and the public defender or with victims, families, and survivors themselves, we can make sure victims of violence and trauma get the help they need so that the cycle can end, one family at a time.