Without a ProKids CASA Volunteer like Phyllis, a young woman with a lot of challenges may not have ever graduated from high school. Phyllis made sure Kanita was enrolled in the right kind of program so that she had the best chance for success. She would even call in the morning to encourage Kanita to make it to class. Most importantly, Phyllis was able to support a child who could be difficult to deal with and make her feel like her life was of value.

Kanita was already 15 when she entered the child protection system. She was in delinquency court when Phyllis 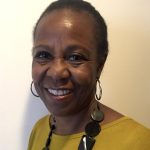 met her. So much about her early life was unknown, but she was clearly traumatized and out of control. Sometimes she got very violent.

“I wanted the best for her,” Phyllis said.“But we were dealing with some very serious issues. I have to believe she will learn as she gets older. But it is so hard to see her struggle.”

Kanita moved into a foster home in Dayton. Perhaps, Phyllis thought, this could be new start for Kanita – away from everything.“But when she would have opportunities, she would sabotage them. Everything was harder for Kanita than it needed to be,” Phyllis said.

Phyllis focused on supporting Kanita and making better what could be made better. She made sure she got back into school in Dayton. And through it all, Phyllis encouraged Kanita to go to therapy. Kanita didn’t engage the few times she made it to an appointment.

Kanita became pregnant at 16 and issues quickly surfaced with the father of the child.Again, Phyllis saw the anger, vindictiveness and stubbornness.When the baby arrived, Kanita would alternate between wanting the father’s mother to care for the baby and then not letting the father and his family see the baby.“She would make scenes, bang on their front door in the middle of the night,”  Phyllis said. “It was hard to tell whether she was going to be able to make it as a mom.”

But thanks to Phyllis and the foster mother who was housing both Kanita and her baby, Kanita found some focus and entered an alternative academic program. By now, she was two-and-a-half years behind in school. Phyllis did not stop encouraging her, even with so much going on in Kanita’s life. In less than eight weeks, Kanita caught up in school.

CASA Manager Carmen Langenkamp said that Phyllis has worked with several teen girls and has been a powerful advocate for each of them.“Phyllis has a good understanding of the child protection system, which helps her ProKids children,” Carmen said.“She has been able to help these teens understand what was happening.”

While Kanita’s case has been more complicated, she said Phyllis never gave up on the girl and found ways for Kanita to become successful, like the school program she completed.

“Phyllis works really well with everyone who is involved in a case,” Carmen said. “She was able to really partner with this foster mother to make sure Kanita’s needs were being met. And Phyllis continued to support Kanita when she made some concerning decisions after she had her baby.”

Kanita’s relationships with both the baby’s father and her foster mother deteriorated. With no support and her unresolved issues with anger, Kanita lost custody of her baby and has limited supervised visitation.

As Kanita neared 18, Phyllis worked hard to try to help her develop a plan to stay in the child protection system, but Kanita decided to emancipate and leave the system.

“I have to believe that she will make better choices as she gets older,” Phyllis said. “There is only so much anyone can do but you always have to keep trying. You never know if something you say one time will come back to her.”

“That’s why I’m a CASA Volunteer,” she said. “You are put into the very life of a child and you have to have hope.”