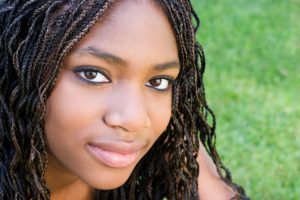 When Kendall was 16 years old, she ran away from her home in Georgia. She was pregnant and scared, so she boarded a bus with plans to take it to Ohio, where she would ask her grandparents for a place to stay.

While Kendall’s mother was loving, her untreated mental health issues had made caring for Kendall and her three siblings difficult. Soon after Kendall moved, her mother traveled to Cincinnati and released Kendall and her siblings to the care of Hamilton County Job & Family Services. Though Kendall was initially placed with her father’s mom, tension in the family meant she would later be sent to semi-independent living, where she currently resides with her now two daughters.

Her CASA Volunteer, Idit, says this new environment provided Kendall with exactly what she needed. While there are certainly rules, Idit says there is also room for Kendall to grow and to achieve her goals while now raising her two daughters.

Even when Kendall suggested high school was too much, her residential manager was adamant she should continue her studies. Idit recalls the encouraging, though clearly exaggerated statements: “All babies do is sleep,” she would say. “Kendall is going to go to school.” And though Idit understood that even finding time to shower as a mom could seem impossible, Kendall’s persistence has allowed her to reach graduation!

“This is such a success story of everybody in the system just making sure that there were no gaps that Kendall was falling through,” Idit says, calling Kendall “remarkable” through it all.

Idit worked diligently to ensure that success. As a CASA Volunteer, Idit kept in touch with Kendall’s caseworkers, counselors and school staff to make sure everyone provide the support that was needed. Because of this, Kendall felt a constant, caring presence and has chosen to stay in the child protection system till the age of 21, a choice that Idit and others on her team have encouraged.

“You know, when she was 16 and pregnant and her mom was being too harsh, verbally abusive, Kendall knew enough to leave,” Idit says. “She has always — knowing or not knowing — advocated for herself. But she knows now better ways to do it.”

Following graduation, Kendall plans to obtain a real estate license, and Idit will be there to help her research requirements, to offer advice and to encourage her along the way — knowing this step is just another in Kendall’s path toward providing a safe, permanent and nurturing home to her own children.

But first, Idit and Kendall will celebrate high school graduation as the milestone it is.