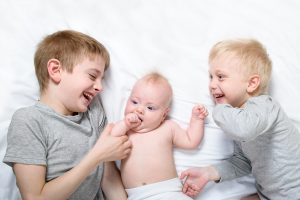 When Brandon and Avery were growing up, their life was chaotic. Their mother, Sheryl, was suffering from drug addiction. Their grandmother – the only other caregiver they knew – was unpredictable. They learned to take care of themselves at only 9 and 6.

When ProKids entered the case, the children had been removed from their family. Their grandmother had left the children alone and Brandon had found his mother passed out at their nearby apartment.

Heidi, the CASA Volunteer assigned to the case, saw that the children were settling in well at their foster home. When the children’s mother had a third child and left the emergency room immediately after delivering, another foster family welcomed the newborn little girl, Sophie.

But as the court proceedings moved forward, Heidi learned that Sheryl wanted treatment. She wanted to recover. She wanted her children back.

Heidi and Anna, the ProKids CASA Manager assigned to the case, walked a delicate line. The foster parents of baby Sophie wanted to quickly move toward adoption. They felt strongly that she was better off with them and did not support reunification. Heidi and Anna encouraged both foster families to continue to give the children the stability they needed while also encouraging Sheryl as she made her way through treatment for her addiction.

Sheryl completed her treatment successfully. ProKids urged the court to allow her to have more and more supervised contact with her children and helped the foster parents understand the roles they could play in the transition.

After the children moved into Sheryl’s home under court-directed protective orders – which included regular ProKids visits – Heidi had to move out of town. Anna immediately appointed Laura, who had become a CASA Volunteer in 2016, to advocate for the three children.

Laura says when she began visiting, Sheryl had made a home with some relatives. The older children were adjusting well, and baby Sophie was beginning to bond with her mother. Sheryl was participating in supportive services.

When talking to Sheryl, Laura was impressed with how she put the well-being of her children first. Was their school district OK? Was it better to get a car or to continue to save for an apartment of their own?

When the case closed and Laura said goodbye, she felt that ProKids had made an impact in helping this family come together again.

“I’d always had a heart for foster children,” Laura says. “This is a way for me to step in when the system is so broken.”