For most of his childhood, Justin’s days were all the same. And other than school, he was never allowed out 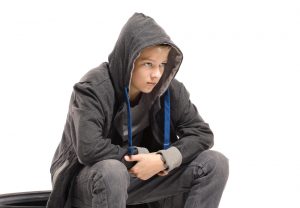 of the house. When he talked too loud, or laughed, or even made too much noise on the stairs, he knew what was coming: a beating. Sometimes at school, Justin heard about other kids going to see Santa Claus. He heard about gifts they got. And he figured he just wasn’t good enough, or special enough.

One day, he was removed from his home. His abuser was sent to jail. But Justin moved around a lot.

But one very special year, just before it wouldn’t really mean anything, his foster parents took him to the mall.

And he began to heal from the trauma he’d faced.

Every day, ProKids speaks up for children like Justin and makes sure they are safe. But more than that, we want to make sure they have a childhood.