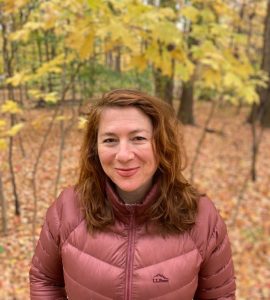 Amy Hyde came to ProKids four years ago with experience as a CASA Volunteer in Florida.

In Amy’s eyes, one of the greatest thing we can do as advocates is stay consistent. If her kids need a ride, she’s there. If they want to talk about hard stuff, she’ll listen.

In her most recent case, Amy has been both realistic and optimistic — supporting five siblings in three placements — throughout their time in the child protection system.

An alcoholic, living with untreated mental health issues, their mother had abused them both physically and emotionally. The brunt of this fell on her oldest daughter, “Ivy,” who at 16 functioned as a parental figure to her four siblings, ages 14, 12, 10 and 6.

As the CASA Volunteer, Amy got to know the children, their caregivers and their professional supports, visiting once a month — if not more — to ensure their safety and respond to their needs.

Early on, Amy met the only constant person the children had known: a woman named “Mrs. D.”

Mrs. D was a family friend and fellow parishioner who often provided the kids with a safe space to sleep and eat. They had always been welcome. So when the kids were removed from their family, she opened her home to them. Amy worked to build trust with Mrs. D, establishing herself as a resource to this growing household.

As the case progressed, the boys, “Jamar” and “Marius,” were moved to their father’s care. Despite living in a different city, Amy communicated closely with their new social workers and high school teachers, and ensured the boys had access to funds for clothing, school supplies and sports fees.

Until their case was closed, with dad receiving custody, Amy visited frequently — not only to check on the boys — but to facilitate visits with their sisters.

Meanwhile, Amy helped the oldest move past her parental role and onto a path of independence. Amy attended Ivy’s high school graduation and drove her to college orientation, helping to connect her with resources, services and scholarships throughout her transition.

Ivy is currently taking a break from school to focus on work, and Amy acknowledges she is bright in “so many ways” and capable of anything.

Amy remains dedicated in her work, advocating for the girls as the court determines their future. She meets with Mrs. D every few weeks, passing along resources, coordinating camp opportunities, and meeting needs as they arise. Most recently, Amy helped find funding for one of the girls to join the school dance team.

While they no longer have immediate trauma needs, anxiety can linger, and Amy works to answer their questions and calm their fears.

“If mom loves us, why is this happening?” they would ask.

And while many people are angry with their mother, Amy approaches her work from “a place of compassion and connection.”

Her answer: Their mom does love them, but her mental illness gets in the way of her involvement.

According to them, this was the best explanation anyone had ever given.

Throughout the case, Amy has seen the kids’ natural tendency: what she calls a “horrible pattern” of desperately looking for love and acceptance from their mother. Going forward, she hopes they are able to break free from that cycle.

“I hope they can know they are loved, and they are good,” she said, that they can go on to have a life full of love and success.

Every child Amy has served has grown her heart “in a hundred different ways.”

We thank Amy sincerely for her consistency with this family. ProKids is proud to name her a Darlene Kamine Advocate of the Year.