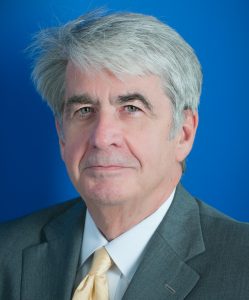 Tom Cuni began his career as a lawyer in 1975. In the 1990s he began working on committees for the Cincinnati Bar Association  and subsequently was elected to its Board of Trustees. He served as President of the CBA for two terms. He then joined the ProKids Board of Trustees in 2010. As he completed his term as ProKids president, and began to step away from fulltime legal practice, Tom asked to serve as a volunteer attorney for ProKids cases. For his passionate and thoughtful advocacy, Tom has been named the 2019 Merilee Turner Volunteer of the Year.

While Man, West Virginia, is just four hours southeast of Cincinnati, it may as well be a world away. When Tom Cuni was growing up there, the small coal mining town fueled his life-long curiosity about the larger world, and also nourished his sensitivity to the disparity that existed between his stable, secure family and the families around him which often lived in chaos and poverty.

“I saw the disadvantages in my classmates’ lives,” he says. “I’ve also seen how some of their lives have turned out and that if they chose to succeed, it often turned out that way.”

That early lesson in what resilience looked like, his understanding of the hard work of parenting after raising his own sons, and his desire to broaden his commitment to the community, make him an energetic and thorough attorney on behalf of ProKids children.

In his volunteer attorney role, he has already served more than 200 children. In 2015, his ability to advocate in juvenile court was recognized with the Ohio CASA Volunteer Attorney of the Year award.

Tom says his work is not only meaningful, but it feeds his curiosity. Professionally, he had never worked in juvenile court. Over the last several years, beginning with a tutorial from former Juvenile Court Judge Thomas Lipps, he has learned more every day about the families which find themselves in that court, the child protection system and about ProKids itself.

“These are families in crisis,” Tom says. “The parents are not bad people necessarily. But we can see what children need and that sometimes isn’t what they get.”

Tom says it took nearly a year of experience in the courtrooms of Juvenile Court before he really felt comfortable. “You find that there is no one set of rules, no formula for what exactly fits the child,” he says. “There are a lot of potential solutions and our job is to find, and advocate for, the best one for that particular child.”

Tom has not changed his assessment of ProKids, whether from the perspective of a board member or as a volunteer attorney.

“I really like the people who work here,” he says. “There is no diversion from the real mission of ProKids. It is professionally run – in the best possible use of that word – and is really efficient in its use of people and resources.”

That’s why he’s willing to lend his legal skills in other ways, such as helping ProKids navigate a complex planned gift of property. He’s been known to send midnight emails from Europe after a full day of hiking, just to keep up with his volunteer commitment to ProKids.

ProKids Executive Director Tracy Cook says that Tom thoughtfully reviews each case file before court, consults with the ProKids CASA Manager and CASA Volunteer, communicates and negotiates with counsel for the other parties – and delivers wins for ProKids children.

Tom, who developed an understanding of post-traumatic stress disorder (PTSD) as a veteran of the Vietnam War, knows many of the children involved with the court also suffer PTSD because of the horrendous circumstances of their lives.

“Every week, the generosity of Mr. Cuni impresses me, his insight broadens our thinking, encourages me and his belief in our work fuels us,” Tracy says. “Reassuring and confident, authentic and wise, he has brought his gifts to us as a true servant leader.”