With practically a lifetime of volunteer work behind her, Mary Anne Bressler had learned that by giving her time, she could make a difference in her 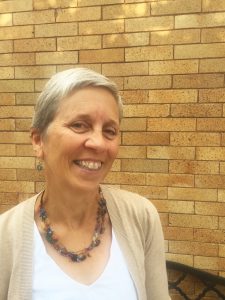 community. But she didn’t realize right away the impact she would have as a CASA Volunteer.

“Even though it’s seldom ‘happily ever after’ when I end a case, I keep going,” Mary Anne says. “I keep learning more about the resiliency of kids and how families aren’t defined by anything other than the sharing of one another’s hearts.”

Mary Anne, who works for a church, says her very first case convinced her that children and families deserve every bit of understanding, compassion and advocacy she could muster. A little 8-year-old girl, Star, was removed from her mother because of her addiction.

Star never failed to smile and chatter, sharing her secrets with Mary Anne. “She was so able to live with trauma, to function in chaos,” Mary Anne says. “When her mother got treatment and a job, it was amazing to see them reunified.”

In another case, Mary Anne spent hours on the phone with a grandmother who still was raising her own teenagers when she opened her heart and her home to three of her grandchildren who were removed from their mother.

“She took on a lot and it hadn’t been easy. There was generational poverty in their family. Her own children had once been removed but she had turned her life around.”

“It may not have matched some idealized view of what a family looks like,” Mary Anne says. “But it’s more than what money can buy. This grandmother would do anything for these children. She loves them. I was so glad we could advocate so these children could have a forever home with her.”

On her current case, a 13-year-old boy and his sister, 11, were living with their drug addicted mother in her Northside home. With no heat in the winter, they would walk to the public library to get warm. There was little food. They were removed and placed with a great aunt, Naomi.

“She’s the only option for them. There is no one else in their family who can take care of these children,” Mary Anne says.

At their Aunt Naomi’s, the children tried to settle into a routine. But many things kept changing. Their mother wouldn’t always come to scheduled visits. Their therapists changed several times. Even their county caseworkers changed, with three different workers in the first six months.

But Aunt Naomi – and Mary Anne – were the constants. And Mary Anne was determined that Aunt Naomi would continue to care for them. “There’s such a toll on people like her when they take in these children who have been through trauma and carry such burdens,” Mary Anne said. “There’s the financial cost and the emotional cost to them but they can love these children.”

So Mary Anne talked regularly with Aunt Naomi, supporting and encouraging her. She made sure the older boy, Thomas, got what he needed in school and from his therapists to deal with his anger and frustration. “He doesn’t have a lot of control in his life,” Mary Anne said. “But he’s sweet, with a sly sense of humor.”

His sister, Jasmine, “loves to tell me what’s going on,” Mary Anne says. She’s found her footing in her new school and has done well there. She likes to arrange hair and do elaborate manicures, as well as practice flips and cartwheels in the yard.

For Thomas and Jasmine, it’s been a long journey from wanting to return home to their mother to making a new life with Aunt Naomi. Mary Anne said ProKids has advocated for her to provide a forever home for the children and, with her encouragement and support, Aunt Naomi has agreed. She expected to adopt the pair soon.

Charlotte, the CASA Program Director and Mary Anne’s CASA Manager, says the aunt went from planning her retirement to committing to the children, thanks to Mary Anne’s work.

“Mary Anne showed great caring and patience,” in working with the family, Charlotte says. “It’s clear that this is the kind of loving care and stability that will help these two children thrive.”

Charlotte says Mary Anne shows “amazing patience, collaboration and consistency to see permanency” for ProKids children. She says that Mary Anne’s insight and foresight help her resolve cases in the best interest of the kids she serves.

“Despite how difficult the work is, the staff at ProKids are so life-giving,” Mary Anne says. “I find it inspiring to work with them on behalf of our children.”