When Amy Gilles stepped back from fulltime pediatric nursing, she missed interacting with children – especially as her own two sons grew up. “I wanted to see 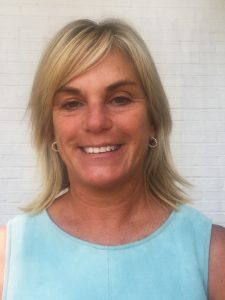 how I could make an impact,” Amy says. “And then someone in my book club who was a CASA Volunteer said ‘I think you would be good at this.’”

When Amy came to ProKids to learn more, she was impressed by the organized approach to training, the support she would receive as a volunteer “and the strong women who work at ProKids.”

And although she knew a lot about children, she found out there was a lot to learn. “I found I needed to learn a lot more about my city, beyond my sheltered bubble.”

On her very first case, Amy was appointed to serve a 4-month-old little girl who was removed from her mother after she had left her in an apartment building hallway. The mother, who had grown up in the child protection system, had untreated mental health issues and showed no signs of living differently.

Amy worked with the foster mom, hoping that the placement would lead to a forever home. She needed a lot of support because little Bella had a heart defect. “The foster mom was very scared. We didn’t know if the heart defect could be surgically repaired and we didn’t know what was ahead. She was a brand-new foster parent and now she had all these doctor’s appointments and there was so much involved.”

Amy was able to be with the foster mother through every appointment and every medical test. She made sure every question got answered and that the foster mom had all the information she needed to care for Bella. Beyond the medical care, Amy also advocated for services to make sure Bella progressed developmentally.

She sometimes would think about giving up, Amy says. “She would worry when Bella was impulsive and hard to manage: was this because of her earlier neglect? Was it something she would outgrow?”

Amy, who saw how attached Bella had become, encouraged the foster mom through the eventual adoption when Bella was 3. Amy says the case  case proved to her that ProKids makes a difference.

“If ProKids wasn’t there, I don’t think the foster mother would have seen it through,” she says. “And to see this child go from a neglected infant to a flourishing preschooler is just incredible.”

Amy is now advocating for a little boy named Kory. He was only 2 years old when Amy first met him after he was discharged from the intensive care unit. He had brain damage being beaten so badly that his retinas had hemorrhaged. He had partial loss of his vision and will have some disabilities as he grows up, particularly with speech and motor skills. “He will never be the same,” Amy says, sadness in her voice. “The physical abuse was just horrible.”

While a criminal case is proceeding, Kory moved into a foster home. Amy was pleased to see Kory settle in to a routine after two months in the hospital.

“It’s an all-boy home where they play pirates,” Amy says. “It’s great to see Kory active again and even climbing around.”

As the case proceeded, Amy learned more about Kory’s family. He and his mother had lived with his maternal grandmother in another state before. Would she open her heart and home to the little boy with so many medical needs? She agreed and Amy got to work coordinating all the care Kory would require in that state.

With pages of notes and contact information, Amy put together the referrals so that Kory’s care could continue when he is placed with his grandmother.

“It’s pretty complex,” Amy says. “But the grandmother has come to Cincinnati to learn about what Kory will need and understands that she has to protect him, even from her own daughter.”

Seeing such trauma in young children’s lives can be overwhelming and Amy admits that she can get frustrated, especially when court delays or JFS bureaucracy can tangle things up, Amy says it is the “small successes that keep you going.”

Her CASA Manager, Staci, says that Amy is “detailed, organized, easy to talk to and professional.” With her background as a nurse, Amy “makes sure children that have experienced medical trauma are safe, protected and stable.”

“We work with these families at their worst time of need,” Amy says. “ProKids is able to make a difference because everyone is strong, completely professional, but still tender-hearted when it comes to the kids.”