Karen Gerrety says that in serving ProKids children, CASA Volunteers can’t avoid the messy conflicts that are in their families. “But we can be the 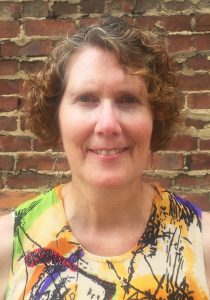 calming influence,” she says. “We can help reduce any tension because we are speaking up for the children. And that’s what they need.”

Karen has worked for Duke Energy since she graduated from high school. Later, after earning her college degree, she wanted to do something that made an impact in her community. When she learned more about ProKids, she knew it was the way she wanted to serve.

“But I hadn’t had a lot of experience with children,” she says. “I wondered if I would be able to relate. But the training and the staff at ProKids made me believe I could do it.”

At first, Karen thought that serving very young children would be a good fit for her; maybe it would be easier to deal with the issues involving babies and preschoolers.

But from the beginning – on a case with three older children – she learned that her passion for advocacy made everything easier. “I felt like we really could make a difference,” she says. One 8-year-old boy, Jamar, was in a custody case with child protection issues.  Between the mother and the father, Karen says, “there was a lot of bad blood.”

She says it was painful to see the family go through the lengthy court process, after the father had been absent from Jamar’s life for two years. But she kept her focus on Jamar and what was in his best interest. “He was so sweet and so cute,” Karen says.

“We did what we could to defuse the situation. And when the father wanted visits right away, we worked with him to take it slow and start with just an outing.” Karen says the visits were comfortable for Jamar and then could get to the point of overnight visits when the boy was more ready.

Karen says she counts on the support she gets from ProKids when she runs into issues on her cases. For example, she served a little girl whose 16-year-old mother was in foster care herself. “There were a lot of things I didn’t know,” Karen says. “But at ProKids, I had access to everything I needed and could do everything I needed to do.”

The youngest child she has served was a baby boy who had been born prematurely. His mother, who had been using heroin, wasn’t making progress in her addiction treatment. His father was in prison.

Andrew, who had one little curl in the middle of his forehead, wasn’t eating well in his foster home, suffered from tremors, and it was clear that he would need physical therapy and occupational therapy as he grew up.

He moved into the home of the only relative who was able to care for him. There were four other children in the home – all under 7 – but Andrew began to thrive. Karen worked with them to understand his medical needs and to coordinate all the therapy and medical care he needed.

At the same time, she encouraged the mother to get treatment and to visit with her son. But she didn’t follow through on any treatment and wasn’t even coming to the scheduled visits.

Karen knew that the clock was running out for the mother to be reunified with Andrew and began to talk to the family about taking legal custody of Andrew.

The court agreed. Shortly after that, Andrew’s mother died in the throes of her addiction. Karen says her death made it even more important that ProKids had advocated for Andrew to have a safe, stable home.

But safety and stability don’t always come quickly. Karen has seen cases go on longer than she’d like, but she never stops working for the children as an advocate and as the volunteer who keeps the donated children’s books organized for distribution by the CASA Volunteers.

Morgan, her CASA Manager, says Karen “truly loves what ProKids stands for and is always a huge supporter of the ProKids mission.”

“She is extremely detail-oriented and organized, which really helps us advocate in court for the best interests of our children,” Morgan says.

“My world has always been pretty sheltered,” Karen says. “Going into these children’s lives is hard, but I think ‘if not me, then who?’”