Wynndel Watts is the 2020 Merilee Turner Volunteer of the Year. 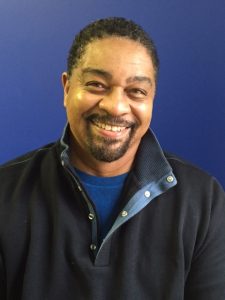 Wynndel came to ProKids after a 32-year career in technology sales and marketing. He’d coached youth soccer and served on non-profit boards, but when he heard about the role of a CASA Volunteer, he began training as soon as he could.

He says he wanted to find a place where he could be emotionally engaged and do hands-on work to make our community stronger.

Since then, he’s had 6 cases, serving 18 children alongside his wife, Michelle.

The two of them are a tremendous team. In one case that lasted nearly two years, they worked with six children whose mother was in an abusive relationship with the father of the youngest child, who was just 2 years old.

There were allegations that some of the children had been abused as well.

They had been removed from their parents and placed with relatives who already had three other children – not to mention three lively dogs.

On visits, Wynndel would take the time to toss a football with the oldest child, who was 12. Wynndel says he would just be himself, knowing that as a Black man, he had a special opportunity to help a young Black boy who had seen such cruelty in his life.

Wynndel knew he could be a positive influence for kids while advocating in and out of court for them to have a safe, permanent, nurturing home.

He and Michelle were also able to have an impact with the children’s mother as well. Wynndel says he felt like having the example of a positive couple gave her a glimpse of what was possible. She began to understand that toxic men were preventing her from having the kind of life she wanted… and that she could live differently.

Because of this understanding and the strides she made, she was reunited with her children, and it was clear that Wynndel and Michelle had made an impact on all of their lives.

As Michelle observed to Wynndel, when they first visited, one of the little girls regarded him warily. She could not trust men after the experiences she’d had in her home. But by the end of the case, she ran to Wynndel for a hug.

Wynndel understands when we break the vicious cycle of abuse and neglect, and create new cycles of growing up safe and confident, we make a powerful difference.

And fortunately for ProKids, Wynndel brought this understanding along with skills as a change-maker to other areas of ProKids. He and Michelle became Friends of Children Society members, pledging their financial support for years. He joined the ProKids Board of Trustees and currently serves as secretary. He was a key part of this year’s online fundraiser, our Call for Community.

Wynndel embraced leadership of the ProKids Diversity, Equity and Inclusion committee in 2019. This group, includes staff, board members and volunteers, and helped develop the vision and plan which will move ProKids forward.

A thoughtful vision and a deeply detailed strategic plan lays out the objectives, goals, strategies and measurements cross-functional teams will bring to life to help DEI permeates ProKids in all we do including our hiring and professional development, volunteer recruitment and training, and in serving our children.

And Wynndel doesn’t shy away from being ahead of the curve. He’s proud of the way ProKids is attaching this work, taking a critical eye in looking at our own practices and behavior, as well as the systems we advocate within. And he’s delighted with how far we are in this work at such a critical time in our community and our nation.

Wynndel has done exactly what he set out to do: putting himself out there in body and spirit to make our community stronger.

We share stories of our children so that our community can understand why ProKids depends on a mobilized community. We change the names of the children, and often of the adults involved, and use stock photos out of respect for their dignity and privacy. The stories themselves, however, are true.