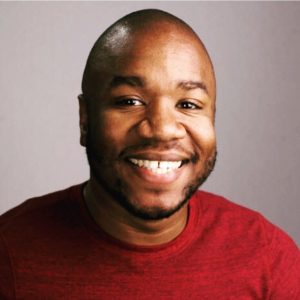 Quatez Scott has a passion for helping others to succeed while always aiming higher in his own life. By sharing his inspiring story, he has drawn others to ProKids and to advocacy for foster children. For this significant contribution, Quatez has been named a 2019 Community Builder of the Year.

At 30, Quatez Scott is many things right now: doctoral candidate, fiancé, accomplished speaker on diversity and inclusion, expert weightlifter. But years ago, he was known as just one thing: a trouble-making foster child. Quatez, who now lives in the Toledo area, was one of 10 siblings born in Cincinnati.

At age 5, he was removed from his single mother who was addicted to cocaine. He was placed with his father, where he survived five years of physical abuse before the child protection system stepped in and removed him from that home.

Kathy King of ProKids met Quatez when he was 11 and in his first foster placement. Quatez had 24 different placements. “I thought it was normal to be abused and neglected,” Quatez recalls. “So I ruined placements that I had because I didn’t know how to be in a family.”

Quatez vividly remembers a meeting when he was a teen. His final foster parent, his caseworker and Kathy were in the room. “They talked about how I was going to end up in prison or dead by the time I was 21.”

He remembers how she took the time to understand him. She advocated for him in and out of court. And, as Quatez puts it, “she saw me as a human when others didn’t.”

Quatez finished high school while living in an apartment on his own. But something had changed for him and he found success in the school musical, on the football team and in his church community.

He was accepted at Wilmington College.

Kathy and others at ProKids remained instrumental in his life, always ready to lend an ear as Quatez considered one life decision after another.

He started sharing his background through ProKids, illustrating the potential of every child and reminding the community of how resilience can be nourished with advocacy in a child’s best interest. Quatez was featured on local media, spoke at the ProKids Friends of Chidren Breakfast and his story was part of the introductory Snapshot for years. He touched thousands of people, giving a face and a name to what is possible for a child who was abused and neglected.

One of those inspired by his story was Ron McSwain, ProKids Friends of Children Society member. Ron and his wife, Phyllis, reached out to see what Quatez needed. “They gave me so much support as I began to navigate adulthood,” Quatez says. “I think of them and their children as a family relationship.”

He graduated with his bachelor’s degree in 2012.

Aware of the challenges for students without family support as well as for students of color, he went on to study educational leadership at Eastern Michigan University and earned his master’s degree.

After holding positions at three different universities, developing skills in residence life, inclusive campus engagement and cultural awareness, he decided to seek his doctorate degree from the University of Toledo in the social and philosophical foundations of education, concentrating his research on black student campus movements.

Quatez knows the statistics: only about half of foster children graduate from high school and only about 10 percent enroll in college. Of that number, only half complete a bachelor’s degree. But he is driven to prove what is possible, aiming to not only get the highest degree possible in his field, but also to be among the 1% of students of color who complete a doctorate.

His ambition to break the cycle goes beyond his career. ProKids Executive Director Tracy Cook recalls Quatez telling her that his definition of success was to have a family and take care of them. Now engaged to be married, he is looking forward to what’s next.

“He always had a strong inner spirit,” Kathy of ProKids says. “And even when others gave up on him, he did not give up on himself.”