Mike Hardy is the kind of guy who will make eye contact with the fussy toddler in the grocery cart ahead of him in line and start making goofy faces, leading to 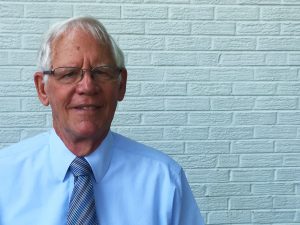 endless giggles. “I have a soft spot for kids,” Mike says. “That’s why I am at ProKids: I wanted to make a difference in the life of a child.”

A former engineer at Procter & Gamble who worked on the Swiffer products, Mike saw that at ProKids he could use his analytical mind and determination to help children who didn’t have the stability of his own children and grandchildren.

“I like to think about ways to solve problems and then get others to help,” Mike says. “And once I decide to get something done, I get it done.”

The first family Mike served had three children. They had been repeatedly “rescued” informally by an aunt and uncle as their mother became addicted to drugs.  But their relatives could no longer care for them and JFS got involved with the family.

The family friends they were placed with were reaching a stressful point with three more children added to their small home. Mike not only supported the parents emotionally, but also found ways to get financial and construction assistance to help them add a bedroom and do other remodeling.

Mike learned how to get the children what they needed in school and to listen as they moved forward in their lives, struggling with a traumatic past and tension in their temporary home.

While the children eventually were separated and placed elsewhere because the family was unable to keep them, Mike is happy that they’ve stayed in each other’s lives. “I was like a bulldog on that case,” Mike remembers. “I saw what needed to be done and just found ways to get it done.”

Mike is now working with four boys. Jackson, the oldest, is a sophomore and had a long history of parenting his little brothers. Their father was in prison and their mother had come and gone in their lives, leaving them in their grandfather’s home. But their grandfather had become ill and things started to fall apart. The electricity was turned off and there often wasn’t food. The boys weren’t making it to school.

When ProKids was appointed to the case, Mike and his CASA Manager, Staci, learned that an aunt was willing to open her home to the boys – but already was responsible for three other children whose parents weren’t able to care for them. Mike knew for this to be the forever home that the boys needed, he needed to support their aunt any way he could.

He applied for assistance to help the boys get clothes and then took them shopping himself. He went to school and made sure each of them got what they needed. For the oldest, that meant a plan to get him extra academic help as well as mental health treatment. “Concentration was such an issue for him,” Mike says, reflecting the toll on Jackson after being responsible for his siblings. “But when we were able to give him what he needed, it made such a difference.”

One of the younger boys, Kyle, settled into school and began to do so well that Mike started looking for additional opportunities for him to use his curiosity, getting him enrolled in a robotics camp which he loved.

Since the mother cannot be found, the aunt remains the stable adult in the boys’ lives. As she manages seven children, Mike finds ways to encourage her and ease her burdens where he can.

“As a CASA Volunteer, you have unlimited opportunities to make a difference,” Mike says. “You can help a child get an education, get them therapy or other things they need. You have a team of people to call on and you are the go-between, recognizing what the needs are and who you have to bug to get things done.”

His CASA Manager, Staci, says that Mike “uses his methodical, engineer mind to find solutions for our children. He likes to read over all the facts and then looks for ways to build common sense solutions.”

Staci adds that Mike’s approach is always flexible and embracing. “He is open to speaking with parents and caregivers about the needs of children in a way that is not condescending, even when they need to have difficult conversations.”

“ProKids is the most efficient way I’ve seen to take care of these hundreds and hundreds of kids,” Mike says. “These children just need someone who sees what is possible and then gets things done. And that’s ProKids.”