Donna is the very definition of persistent. She keeps the team involved in a foster child’s life informed and she also stays on 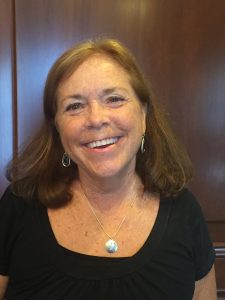 top of anything that needs to happen. Nicco may not know any of that. But Donna’s presence in his life has meant that he had someone who understood when his grandmother died and he felt alone. He had someone to cheer him on to finish high school. And, most importantly to Nicco, he had someone who would visit him even when he was moved to residential care three hours away.

Donna was named one of the 2016 Darlene Kamine Advocates of the Year.

“Being a CASA Volunteer is not really about changing the world,” Donna said. “It’s more of a roller coaster ride. When the child is heading down, you’re down too. But then their faces brighten up about something, and you’re going up again.”

CASA Program Director Charlotte Caples, who is Donna’s CASA Manager, said her biggest strength is her persistence. “She never gives up on a child,” Charlotte said. “She knows how a CASA Volunteer can impact a child within the child protection system and she is willing to give of herself to make that difference.”